ULHPC uses Slurm (Simple Linux Utility for Resource Management) for cluster/resource management and job scheduling. This middleware is responsible for allocating resources to users, providing a framework for starting, executing and monitoring work on allocated resources and scheduling work for future execution. 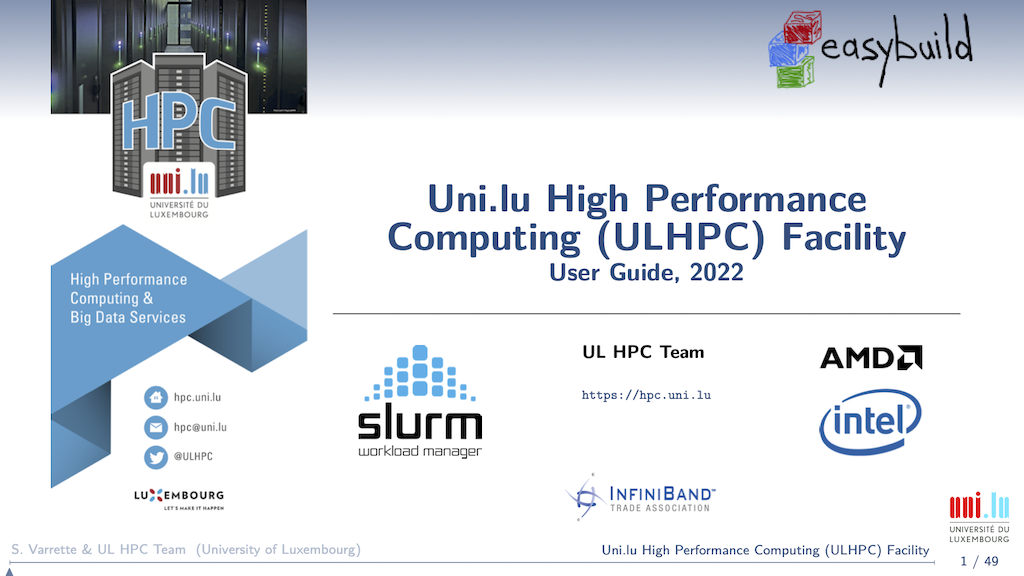 If you want more details on the RJMS optimizations performed upon Aion acquisition, check out our IEEE ISPDC22 conference paper (21st IEEE Int. Symp. on Parallel and Distributed Computing) presented in Basel (Switzerland) on July 13, 2022.

In its concise form, the Slurm configuration in place on ULHPC supercomputers features the following attributes you should be aware of when interacting with it:

For more details, see the appropriate pages in the left menu (or the above conference paper).

A job is an allocation of resources such as compute nodes assigned to a user for an certain amount of time. Jobs can be interactive or passive (e.g., a batch script) scheduled for later execution.

What characterize a job?

A user jobs have the following key characteristics:

Once a job is assigned a set of nodes, the user is able to initiate parallel work in the form of job steps (sets of tasks) in any configuration within the allocation.

When you login to a ULHPC system you land on a access/login node. Login nodes are only for editing and preparing jobs: They are not meant for actually running jobs. From the login node you can interact with Slurm to submit job scripts or start interactive jobs, which will be further run on the compute nodes.

There are three ways of submitting jobs with slurm, using either sbatch, srun or salloc:

srun is also to be using within your launcher script to initiate a job step.

sbatch is used to submit a batch launcher script for later execution, corresponding to batch/passive submission mode. The script will typically contain one or more srun commands to launch parallel tasks. Upon submission with sbatch, Slurm will:

When you submit the job, Slurm responds with the job's ID, which will be used to identify this job in reports from Slurm.

srun is used to initiate parallel job steps within a job OR to start an interactive job Upon submission with srun, Slurm will:

A job can contain multiple job steps executing sequentially or in parallel on independent or shared resources within the job's node allocation.

Within a job, you aim at running a certain number of tasks, and Slurm allow for a fine-grain control of the resource allocation that must be satisfied for each task.

The total number of tasks defined in a given job is stored in the $SLURM_NTASKS environment variable. This is very convenient to abstract from the job context to run MPI tasks/processes in parallel using for instance:

We encourage you to always explicitly specify upon resource allocation the number of tasks you want per node/socket (--ntasks-per-node <n> --ntasks-per-socket <s>), to easily scale on multiple nodes with -N <N>. Adapt the number of threads and the settings to match the physical NUMA characteristics of the nodes

16 cores per socket and 8 (virtual) sockets (CPUs) per aion node.

14 cores per socket and 2 sockets (physical CPUs) per regular iris.

There are several useful environment variables set be Slurm within an allocated job. The most important ones are detailed in the below table which summarizes the main job submission options offered with {sbatch | srun | salloc} [...]:

At a minimum a job submission script must include number of nodes, time, type of partition and nodes (resource allocation constraint and features), and quality of service (QOS). If a script does not specify any of these options then a default may be applied. The full list of directives is documented in the man pages for the sbatch command (see. man sbatch).

Each option can be specified either as an #SBATCH [...] directive in the job submission script:

Or as a command line option when submitting the script:

When selecting specific resources allocations, it is crucial to match the hardware characteristics of the computing nodes. Details are provided below:

As can be seen, Slurm [features] are associated to ULHPC compute nodes and permits to easily filter with the -C <feature> option the list of nodes.

The typical format of your Slurm submission should thus probably be:

This would define a total of <N>\times<n> TASKS (first form) or <N>\times \#sockets \times<s> TASKS (second form), each on <thread> threads. You MUST ensure that either:

14 cores per socket and 2 sockets (physical CPUs) per regular iris node. Depending on the selected form, you MUST ensure that either <n>\times<thread>=28, or that <n>=2<s> and <s>\times<thread>=14.

Recall that the Slurm controller will set several SLURM_* variables in the environment of the batch script. The most important are listed in the table below - use them wisely to make your launcher script as flexible as possible to abstract and adapt from the allocation context, "independently" of the way the job script has been submitted.