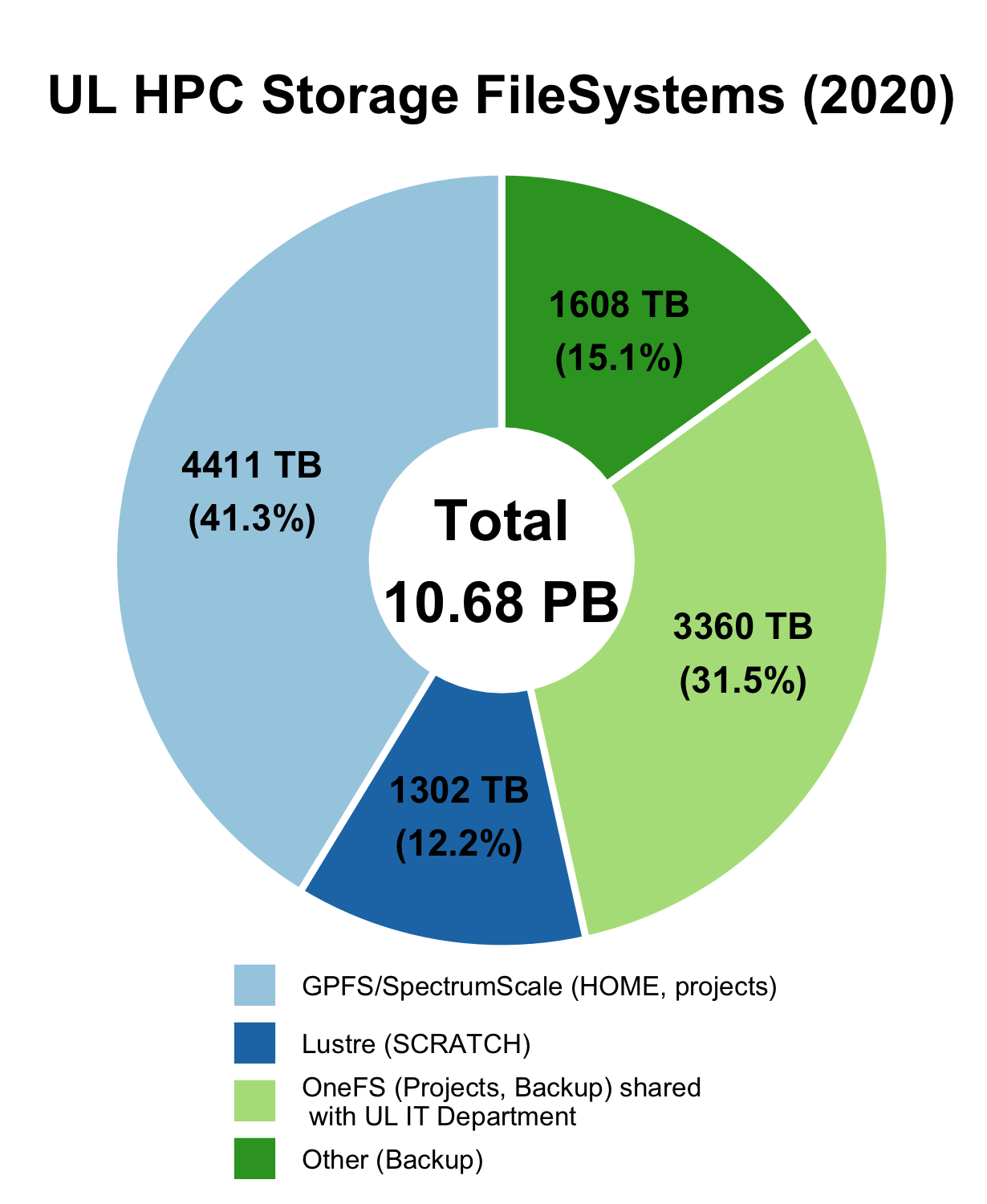 It allows sharing homedirs and project data between users, systems, and eventually (i.e. if needed) with the "outside world". In terms of raw storage capacities, it represents more than 4PB.

Home directories provide a convenient means for a user to have access to files such as dotfiles, source files, input files, configuration files regardless of the platform.

Refer to your home directory using the environment variable $HOME whenever possible. The absolute path may change, but the value of $HOME will always be correct.

See quotas for detailed information about inode, space quotas, and file system purge policies. Your HOME is daily backuped, according to the policy detailed in the ULHPC backup policies.

Project directories are intended for sharing data within a group of researchers, under /work/projects/<name>

Refer to your project base home directory using the environment variable $PROJECTHOME=/work/projects whenever possible.

See quotas for detailed information about inode, space quotas, and file system purge policies. Your global projects are daily backuped, according to the policy detailed in the ULHPC backup policies.

When a project <name> is created, a group of the same name (<name>) is also created and researchers allowed to collaborate on the project are made members of this group,which grant them access to the project directory.

Be aware that your default group as a user is clusterusers which has (on purpose) a quota in project directories set to 0. You thus need to ensure you always write data in your project directory using the <name> group (instead of yoru default one.). This can be achieved by ensuring the setgid bit is set on all folders in the project directories: chmod g+s [...]

When using rsync to transfer file toward the project directory /work/projects/<name> as destination, be aware that rsync will not use the correct permissions when copying files into your project directory. As indicated in the Data transfer section, you also need to:

For the same reason detailed above, in case you are using a build command or more generally any command meant to write data in your project directory /work/projects/<name>, you want to use the sg as follows:

This is particularly important if you are building dedicated software with Easybuild for members of the project - you typically want to do it as follows:

The way the ULHPC GPFS file system is implemented is depicted on the below figure.

It is composed of:

The performance of the GS7990 storage system via native GPFS and RDMA based data transport for the HPC filesystem is expected to be in the range of at least 20GB/s for large sequential read and writes, using a filesystem block size of 16MB and scatter or cluster allocation. Performance measurement by IOR, a synthetic benchmark for testing the performance of distributed filesystems is planned upon finalization of the installation.

In complement to IOR, the IO-500 benchmarking suite (see also the white paper "Establishing the IO-500 Benchmark") will be performed. IO-500 aims at capturing user-experienced performance with measured performance representative for:

Two NAS protocol servers are available, each connected via 2 x IB EDR links to the IB fabric and exporting the filesystem via NFS and SMB over 2 x 10GE links into the Ethernet network.